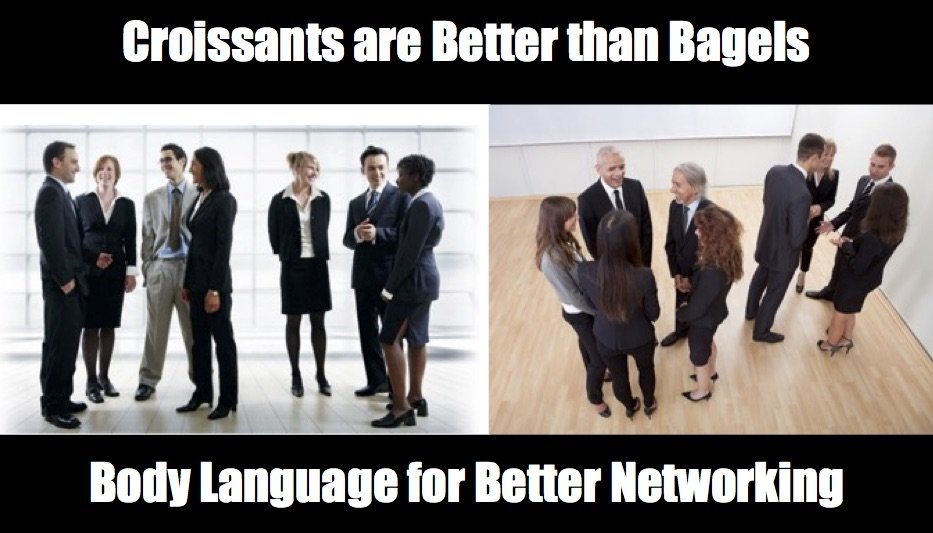 What I’m about to share is a tip from a very memorable section of my Art of the Schmooze training.  A year after attending my session, sometimes even two years later, I’ll run into a past attendee and they’ll excitedly point at their feet and say “Croissant! Croissant!”

What are they talking about?
Let’s say you’ve arrived at a networking event, you’ve circled the room looking for an opening for your first conversation, but you’re surrounded by those tight networking circles. I call those shoulder-to-shoulder huddles “bagels” and they are nearly impossible to break into. If you are like most people you’ll be looking for an easy opening and might be drawn to the person standing by themselves against the wall. Unless you’re a regular and can introduce that person to someone when your conversation ends, your best bet is to engage with folks in those bagels.

Now imagine you’re one of the people standing in a typical networking bagel. If you took a small step back with one foot and turned your torso slightly, you’d create an opening that would make it easier for someone to join your group. That is the croissant we’re looking for.

How do you stand so you're easy to approach?

This simple physical act is one of the best ways to navigate an event[click to tweet] and create a welcoming community space. I've found that only a small percentage of attendees need to be practicing this and the effect will begin to be felt by everyone. They'll leave wondering why that event felt so friendly and welcoming.

But let's say you're approaching a bagel and no one in the circle seems to have a clue that you're there. What do you do? My suggestion is you try to get the attention of just one of the people in the group. You shouldn't be trying to take over the conversation or talk to the whole group. Check how everyone is standing and see if you can spot someone with a more open stance. Just focus on one of the people in the circle and as the group conversation continues, begin a side conversation with them. And of course, use your own body language to welcome others into your new conversation.

What exactly is the stance?
Your weight is on your back leg which is turned slightly – either towards two o'clock or ten o'clock. 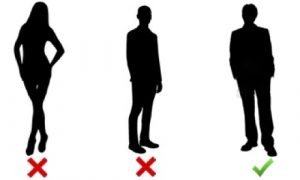 Robbie Samuels helps his clients shift their mindset around relationship building, so they discover new connections and business opportunities in the world around them – and know how to act on them. He has been recognized as a “networking expert” by Inc. and Lifehacker, and profiled in Stand Out: How to Find Your Breakthrough Idea and Build a Following Around It by Dorie Clark. Robbie is the author of the best-selling business book Croissants vs. Bagels: Strategic, Effective, and Inclusive Networking at Conferences (click to download the Bonus Bundle, plus receive free audiobook).

A professional member of the National Speakers Association, he has been speaking and coaching on the topic of inclusive networking for over a decade. While practical and filled with easy to implement action steps, his talks are most often described as “dynamic, engaging, and funny.” He shares “small, big ideas,” everyday ideas, which are accessible and immediately actionable and have the power to inspire significant change. Tune into On the Schmooze, his weekly podcast on leadership and networking, to be inspired by the talented professionals he interviews.