Most of us have had the experience of trying to find our way into a tight circle of acquaintances at a party (worse than a bagel it's a bagel with lox!). With the help of a few volunteers I show them how quickly and easily those of us in the circle can use body language to open up space for newcomers to step in. That's the croissant we're looking for. 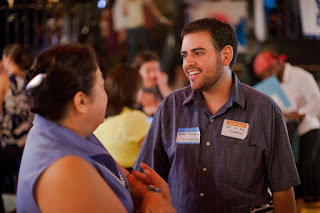 The physical posturing is similar to the way a fencer or boxer would stand. Feet shoulder width apart with weight on the back leg, torso turned slightly toward whichever foot is in back. This simple physical act is one of the best ways to create a welcoming community space. I've found that only a small percentage of attendees need to be practicing this and the effect will begin to be felt by everyone. They'll leave wondering why that event felt so friendly and welcoming. 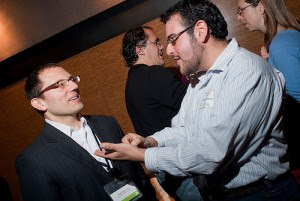 Sometimes we find ourselves in passionate conversations with just one other person and don't want to be interrupted. We're busy solving the world's social ills, making plans for dinner or any number of heated topics. Our body language will clearly indicate – don't bother us. In my opinion couples (or any two people) in an animated conversation are best left alone.

What if we see someone off by themselves? Should we approach them? Many tell me they find it easiest to start a conversation with someone standing by themselves. It's true that there are fewer competing factors, but my suggestion is to consider whether you are a “host” or a “guest” of the event you're attending. I don't mean host as in you paid for the guacamole. Consider yourself a host if you know more people in the room than most vs. knowing hardly anyone at all.

If you're a guest approaching someone by themselves is a great way to get stuck standing in the corner talking to someone who also doesn't likely know anyone in the room. If you're a host it's a great gift to approach someone by themselves and after speaking for a few minutes then introducing them to someone else in the room so they're no longer left on their own. It's particularly welcoming to keep an eye out for what I call “outliers”. These take form as the familiar “wallflower”, but you should also be conscious of those that are demographically outliers in the room. Welcoming those that are older/younger, of a different race/ethnicity, or look more visibly uncomfortable, shy or nervous than the rest of the room is one of the wonderful ways to be a host.

Some caution is prudent here. If in the process of trying to welcome someone you inadvertently “other” them then you'll have the exact opposite effect. While starting a conversation with a compliment is a good idea we should be aware that often the very thing we're drawn to comment on is something that's different from ourselves. For instance, commenting on someone's height “Wow, you're tall! How tall are you?” isn't a compliment nor is it a conversation starter. The same is true for hair texture, skin color, basically anything that isn't chosen by the person you're talking to. Comments about sunglasses, scarves, jackets, jewelery are all things that can be perceived as compliments (provided they are positive) and graciously accepted as such. The key difference is these are all items chosen by the wearer, not a factor of who they are.

Robbie Samuels has been recognized as a networking expert by Inc. and Lifehacker, and profiled in “Stand Out: How to Find Your Breakthrough Idea and Build a Following Around It” by Dorie Clark.  Check out “On the Schmooze” his new podcast.