Empowering Children to Make the World a Better Place 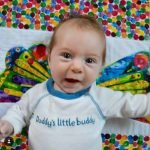 While I had been planning for that moment all throughout my wife’s pregnancy — immersing myself in researching baby gear for our registry and reading parenting books — I could not have been prepared for what it felt like when my son finally arrived.

That day I joined the brotherhood of fatherhood.

Growing up I didn’t think I would become a father. For starters, I’m transgender and was raised a girl. I also wasn’t at all interested in carrying a child, even at a young age. So I wasn’t sure how this parenting thing would happen for me.

Over a decade ago, I decided to move from living a very gender-blurred existence to being solidly perceived as a man. But that word– “man” — always felt a little off for me. I would say I was a “guy” without hesitation, but a man … well that had a different connotation for me.

As someone raised female who then came out as gay, I had some strong feelings about the way white, cisgender straight men behaved in our culture. I had no interest in exemplifying that.

During the tumultuous time when I was committing to this life-changing decision to take hormones and become the “man” I knew myself to be, I was very fortunate to find a very welcoming feminist men’s group. I was thrilled when I realized I could work beside other feminist men to expand the possibilities of what a man could be in our society by working on issues such as racial justice and ending homophobia. These were my people. They helped me see that I could move through the world as a queer, feminist, race-conscious man without needing to include any qualifiers – like “because I’m trans” or “because I'm queer.”

Sadly, after many years of working together and organizing in Boston, we all went our separate ways with many members ending up spread across the country and no longer in my life. I definitely have felt that loss.

I don’t think I understood how much I was craving that kind of community and support until I became father. Once again I was taking on a new identity, facing the challenge of defining for myself what kind of dad I would be.

I knew I wanted to be an active and engaged dad, but with zero experience with babies or kids I was at a loss for what my role would look like. In addition, my wife and I realized that, for our family, me staying home with our son was going to be our best option. I would be able to keep some focus on growing my business as a professional speaker, launch my podcast, and work on my book — all while being our son’s primary caregiver. 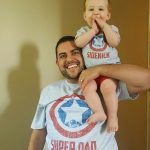 This presented me with a whole new set of challenges regarding being a father. I had heard stories about how dads are ostracized by moms on the playground or when they pick up their kid at daycare. All of my closest friends are women so I knew I would have no trouble socializing with moms, but they wouldn’t know that.

That is why I consumed as many parenting philosophy books as I could in the months leading up to my son’s birth to feel more prepared for this daunting challenge.  In the midst of this research, I discovered The Modern Dads Podcast. The name alone piqued my interest and after listening to one episode I was hooked. The co-hosts were stay-at-home dads who had started a very successful dads group in New York City about a decade ago.

At the end of each Modern Dad episode they ask their guest to define what it means to be a modern dad. Generally the answer includes being engaged, stepping up, not being afraid to try, and challenging traditional definitions of fatherhood.

I like all of this and I’m also hearing that many of these dads are also fairly conscious about their privileges as straight white men. Which is the other big question I’m struggling with: How do I raise my presumably straight, presumably cisgender boy to proud of who he is and aware of the privilege he has in this world?

So how have I progressed with this part of my journey that began almost a year ago?

To counter my fear of being left out I created a Facebook community that I would feel welcomed in and would become a resource and support for other parents. This community for parents of kids about my son’s age has grown to nearly 1,000 members and now hosts a monthly baby clothing swap. Now, lots of moms know me and I’m often greeted by name as I enter a new parenting space. Giving first continues to be the best way I know to build relationships. 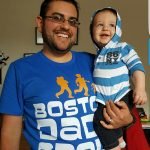 Through The Modern Dads Podcast, I learned that Boston had a dads group.  I have since become one of its co-organizers, coordinating weekly and monthly socials for dads and their kiddos. This has given me the opportunity to meet other dads and begin to form friendships with other guys.

I also attended HomeDadCon, a convention for at-home dads held this autumn in Raleigh N.C. I mentioned it was held in North Carolina because convention organizers had been grappling with how to deal with the fact that the state has a horribly transphobic and homophobic law on the books. They decided to put out a statement and added an LGBTQ parenting panel to the program for the first time in its 21 years. I saw this as an opportunity to come out as a trans dad and was invited to participate on the LGBTQ parenting panel.

In addition, one of my main takeaways from my convention experience is that we at-home dads are not alone. There are as many reasons dads become at-home dads as their are dads, but many of us cherish this opportunity and wouldn’t trade it for anything. I count myself in that group wholeheartedly. My little guy is the reason I get up every morning. Literally.

I am now equipping myself for the day I begin tough conversations about oppression and privilege with my son. My wife and I are committed to providing our son access to and celebrating a range of cultures. We are actively auditing the books he wants to read to be sure they have diverse main characters and show girls taking the lead. We’re bringing our son to cultural festivals and pride festivals. We’re honoring the cultural aspects of our religious upbringing — me as an atheist secular Jew and my wife, Jess, as an atheist raised Catholic. We’re also working to diversify the pool of babysitters we call upon to take care of him so he builds relationships with people of diverse races and ethnicities. All of this is to say that we’re taking seriously the responsibility of raising a strong feminist progressive man.

With the support of the parent groups we are part of, our growing community of parent friends, and our best friends who became his queer aunties, I know my son will be given every opportunity to follow in my footsteps. That he will be proud of who he is, outspoken about his beliefs, live his values, and work to make this world better for everyone. That is all we can hope for.

This is text of remarks I gave at the Humanist Hub in Boston two days before the 2016 Election. 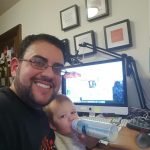 Robbie Samuels is a work-at-home dad living with his wife and son in Boston, Massachusetts. He is one of the co-organizers of the City Dads Group in Boston. He is also the founder of Boston Babies Facebook Group and hosts a monthly baby clothing swap. As a professional speaker he shares how to effectively and inclusively network and build community. His weekly podcast, On the Schmooze, is a mix of interviews with leaders and networking tips.