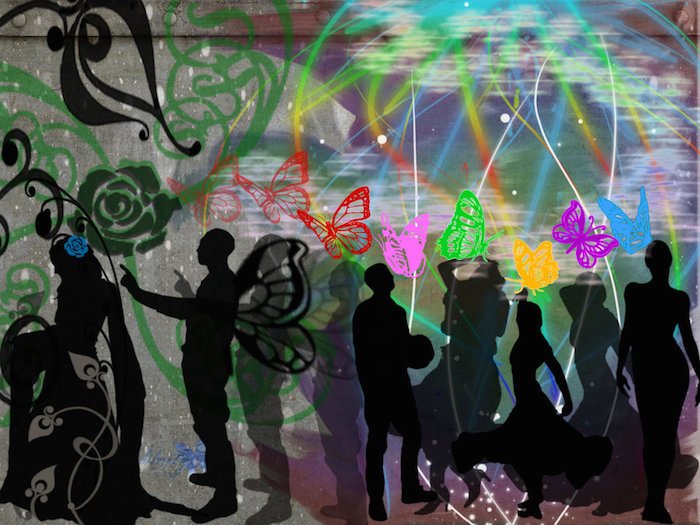 [featured-image size=”featured” single_newwindow=”false”]image credit: bloodyblue.deviantart.com[/featured-image]I'm an extrovert. If bonus points were awarded on the Myers-Briggs Personality Test, I'd test higher than “7” for extroversion. That means I get energy from being around people. I'm able to keep up a demanding schedule (while caring for an infant) that would exhaust introverts if they just heard about it. I don't work hard for this advantage, therefore, I call it a privilege.

I'm also very outgoing. I'm a social butterfly in most social situations and have no problem talking to strangers. For many years I was unaware of the advantages I received for being an outgoing extrovert. I moved through the world obtuse to the struggles of shy and/or introverted people who felt uncomfortable and/or exhausted in social settings.

Thankfully, I'm now much more self-aware and put energy into making it easier for people who aren't outgoing extroverts to be part of the conversation. For instance, I could take over any small group conversation by telling a funny story. But, just because I can, doesn't mean I should.

Instead of being loud and boisterous (possibly read as obnoxious), I'm much more thoughtful about how to engage in social settings. Now, when someone joins my little circle at a networking event I'll pause the conversation for a second to say to them “Hi there, Bob was just talking about his trip to Alaska” and then turn my attention back to Bob.

Wouldn't it be great if this was how outgoing extroverts used their privilege? This kind of welcoming spirit is a natural extension of the conversation tips and body language tips I wrote about previously.

Outgoing extrovert struggling to learn new ways of being in a room?
Keep this acronym in mind: W.A.I.T. = Why Am I Talking?
[click to tweet]

Are you reading this and thinking you don't fit neatly into assumptions made about extroverts and introverts?

Being outgoing doesn't automatically mean you are an extrovert (and introverts aren't always shy). These are two different scales and are not directly correlated.

Extraversion and introversion, as measured in the Myers-Briggs Personality Test, is about where you draw your energy. Do you get reenergized being around lots of people or being home alone? Not everyone is distinctly an extrovert or introvert, many people will fall somewhere in between. If you fall right in the middle you might identify as an ambivert.

Shy extroverts go out often, hate being the center of attention & are assumed to be introverts. [click to tweet]

If a person's sociability is how we determine whether they are an extrovert or introvert we're likely to get it wrong sometimes. Since extroversion and introversion is also tied to how we process information it can impact workplace dynamics in ways we didn't expect. You might think you're building a work team with an even mix of extroverts and introverts, but actually have mostly introverts who are then dominated by the few outgoing extroverts – another common example of extrovert privilege.

To my fellow outgoing extroverts – just because you can, doesn't mean you should. It's never to late to W.A.I.T. [click to tweet]

In the comments
What examples do you have of extrovert privilege? Have you just realized you are a shy extrovert? Share your thoughts!